Ohrid, an immortal town, on the mythical Balkan, a magical hill of Macedonia whose primordial pulsation links ancient and modern times forever. 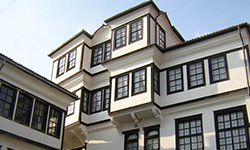 Ohrid has been a living town for two thousand and four hundred years, the legitimate descendant of the shining Lychnida, a town whose achievements were woven into the tapestry of a powerful ancient civilization. The town of Ohrid is indeed the cultural history of the Republic of Macedonia in miniature. As an Episcopal center in ancient times, and likewise through the widely renowned Ohrid archbishopric, the town has likewise through centuries represented the entire ecclesiastical history of Macedonia. It bears the name “The Balkan Jerusalem”. Through the activity of St. Clement of Ohrid, at the end of 9th and the beginning of the 10th century the first pan – Slavonic university in Europe was situate here. Ohrid was the most important official capital of the first mediaeval Macedonian state, of Samuel`s empire. Ohrid is a literary center of Macedonia in the 19th century with the strong maxim of one of the greatest European intellectuals of that time, the native from Ohrid, Grigor Prlichev, so called “The second Homer”: PERFECTION OR DEATH! Today Ohrid is a cultural, spiritual and tourist center of Macedonia. And finally, as the crowning glory of its values, Ohrid and the lake of Ohrid were declared a cultural and natural heritage site under protection of UNESCO since 1980.

The great fact in life, the always possible escape from dullness, was the lake. The sun rose out of it, the day began there; it was like an open door that nobody could shut. The land and all its dreariness could never close in on you. You had only to look at the lake, and you knew you would soon be free.